History Channel: "Mars: The New Evidence" in "The Universe" 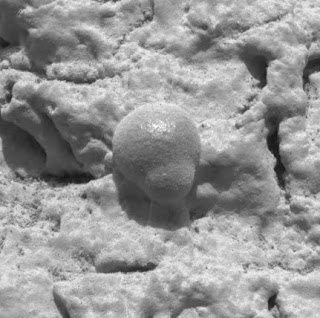 On Thursday, Aug. 5, the History Channel presented “Mars: The New Evidence”, examining the best possible case for life on Mars, as part of the 2010 "The Universe" series.

The show covered the geological history of the planet, and its loss of a magnetic field, which might have occurred when the “core” froze (as in the film “The Core”). The presence of magnetite molecules could have occurred from small bacteria which use it to navigate. The program discussed the 1996 meteorite found in Antarctica, and also discussed the small quantity of methane that keeps appearing on Mars.

The program debunked the “Sasquatch” photo that appears on the Internet (YouTube below) as a two inch rock.

It showed the lander at the North Pole, and examined the apparent briny water drops that appear on the legs. It also explained that it snows actually water snowflakes as on Earth, but the snow evaporates or sublimes in the thin air when the Sun comes up, despite the extreme cold. That actually can happen on Earth.

The program also demonstrated “dry lightning” in Mars dust storms, which could electrocute or jump-start life.

The History Channel has a video on the Mars Pathfinder here.
Miles Syndey has a video of Mars aliens – just a trick with video editing?

Note: On Aug. 12, the History Channel Universe series will present "Magnetic Storm" -- I guess how a solar storm could knock out the power grid.
Posted by Bill Boushka at 7:32 PM