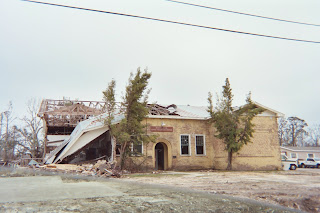 Spike Lee’s new “joint” or HBO documentary about New Orleans, now five years after Hurricane Katrina, is the four hour, two part film “If God Is Willing And Da Creek Don’t Rise”, Part I opening at 9 PM Monday Aug. 23 on HBO, with link here. The first film in 2006 was “When the Levees Broke: A Requiem In Four Acts”.

The film emphasizes the politics of rebuilding or rezoning various areas of the city, sometimes with political motivations, possibly gentrification, possibly driving the poor people out.

There is a lot of discussion of the health hazards (such as formaldehyde) in the FEMA trailers.

New Orleans, the film says, cannot be “reborn” even because of a catastrophe making New Orleans a bathtub shrine. It has a history of purifications, going back to a yellow fever epidemic before the Civil War (also a subject of a movie

The second night of the film concentrated on the BP Deepwater Horizon oil spill, and paraodied the "beyond petroleum" nickname.  The second half also mentioned "mountaintop removal" regarding stripmining for coal.