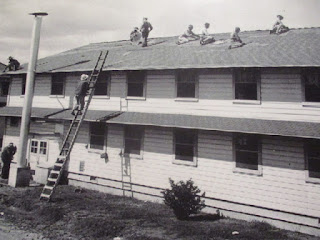 When I was looking for videos regarding national service after reading the interim report from the National Commission on Military, National and Public Service (Issues blog, Jan. 23), I came across as YouTube Patreon channel “Coach Red Pill”, with the 18 minute video “National Military Service”. This dates to August 2017 (just before Charlottesville), seven months into the Trump administration, when North Korea was sounding very dangerous indeed.

The video is definitely on what we usually call the far right, and I don’t know his name, but I found this interesting thread about him on Reddit.

But he certainly clears the air with tear gas. But a couple things he says you need to know about.
He starts out by comparing the “alt right” with the “alt lite”.  He does characterize the alt right as wanting to divide the country into ethno states (which he says Europe always has been). Oh, he says that cannot happen here, but he thinks that the alt lite’s idea of some sort of unified idea of national culture is achievable.  So far, pure MAGA.
He proposes a two year period of military service for all young adults (including women) at age 18. There would be no exceptions, even for the disabled.  The obese would have to lose that weight, he says. He predicts between a 2 to 5 percent failure rate (this reminds me of my stint in Special Training Company at Fort Jackson in the early Spring of 1968 in Basic Combat Training – I passed the PCPT in three weeks).
For people who failed, they would permanently forfeit the right to vote and the right to own any assets. (This material appears at about 10 minutes into the video.) They would become the legal charge of their own families with no rights.  Taken at face value, his proposal would apply to people with disabilities.  So of course it would contradict federal civil rights law as it is now, and might be unconstitutional according to the 13th and 14th amendments, it seems to me, at least.

There is a rather sinister idea being pointed to.  That is, an existential view of human worth. It seems that he wants so shield “the well” in society from the implied future responsibility to be open to make emotional bonds with the disabled.  Since there are no exceptions, someone could be permanently banned from any rights in adulthood if he or she had been wounded during childhood by a crime (as with the Parkland attack).  I wonder if he really intends to allow “genuine” medical exceptions but not allow those that he views as related to personal character (obesity in particular, or low IQ – the “McNamara’s Morons” issue).

He never mentions homosexuality or gender identity, so it would sound, on its face, that LGBT people would serve like anyone else (with no transition possible during service) – since DADT was repealed in 2011.

When I went through the draft there were many medical disqualifications. (“Homosexual tendencies” were listed in 1964 and then actually removed from the list in 1965.)  But the cadre in Basic Training did instill the idea that men who failed at Basic would have their whole lives ruined.

An interesting aside would be that swimming could be required.  I resisted learning to swim, and POC often have not learned.  Army basic did not have this when I was in (1968), but of course the Navy and Marines would.  But it would probably be standard in this guy's world.
Oddly he wants some of the two years’ service time to be spent in caring for the elderly, so if you made it as a young adult you get treated well as a senior in his world.

Perhaps this is the problem, pointed out by some on the Left, of “right wing creep”, where they propose “outrageous” ideas to get people to write about them, which gradually makes them sound more acceptable and become a possible political threat to some minorities (My main blog, Nov. 24 post about a ContraPoints video).

He says (even brags) that all youth would know this is a major personal challenge that approaches at 18 (that’s how it was with the Vietnam era draft, although the student deferments gave us a way out).  He thinks this would do away with the culture of victimization that has led to today’s young adults wanting “safe spaces” and “trigger warnings” with campus speech codes.

He does argue that the national service will bring (non-disabled) people together regardless of race or religion.  He seems to be promoting ableism deliberately, in a manner that does remind one of National Socialism, frankly.
He mentions Nassim Nicholas Taleb’s book “Antifragile”, in talking about the fragility of today’s college youth (as he sees them).  I haven’t read that, but I this video was made before Taleb’s “Skin in the Game”.

Donald Trump, as we know, was sent to military school by his dad and flourished, but escaped the draft with a flimsy and questionable medical exclusion.

At the end, he invites everyone to disagree with him. But make an argument, he says.