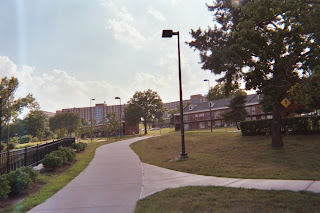 On the Ides of March 2007, ABC premiered this miniseries "October Road" with an interesting premise. A thirty-something novelist Nick Garret (Bryan Greenberg) returns to his home town after ten years of absence, with a controversial novel "Turtle on a Snare Drum". The trouble is, the townspeople feel that the novel (and probable movie) are about them, and they feel like they have been depicted in a kind of Peyton Place (represented by the metaphor of the drum).

There is some discussion of literary agents and A-list publisher promotions -- they changed his pen-name to "Nicholson". Legal literature and books on publisher law have always talked about the risks of using recongizable characters in fiction. It can lead to libel suits (Touching; The Bell Jar). What's more interesting is if the book self-libels the author, too. A lot of kids do that on the Internet on blogs and social networking profiles already, to the consternation of potential employers who see liability risks in this practice.

The script of the first 60-minute episode has some funny lines, like when one townsman says "I have two boys. I only have to worry about two p-- rather than a thousand." That is the kind of town that the young novelist has come back to, in order to get on with his life.

Nice guy Lee Norris (One Tree Hill) has a role in this episode, and throws a punch in a bar fight -- a first for him.

The title of the episode does remind one of "October Sky" -- the movie about wanne be rocket scientist Homer Hickum. This is a different kind of small town story.

The second episode has the townspeople talking about a "Blowback" (that was the name of a movie, review here). He tries to get a job teaching a seminar at the local college, and the English department chair tells him, "what do you have to offer the kids, when you abandoned your community in order to write a book about it?" She calls him a dilettante (rather like he was an object of derision by conservative author George Gilder). I say, the townspeople need to be shaken up. Eventually she relents and he gets his seminar.

As the series resumes on Feb. 2008, Nick, after long writer's block, tries to get a small business loan, and is rebuffed. The loan officer says, "you're a writer. Get an advance for your next book from your publisher. And can I have an autograph?" Indeed. Authors Guild has, or at least used to have a rule, that it was open to membership only to authors who normally get advances from publishers. A concept that seems out of date.

I'm struck by the view "writer-ness" as a state of being rather than the production of content.

On March 10, ABC provided a two-hour season finale, which rather lumbered as soap opera and wasn't very "movie like." Eddie (Geoff Stults) gets beat up and put in the hospital; but "Dad" (Tom Berenger) gets diagnosed with a cancer and will need a bone marrow transplant. The sons will have to look after him, but yet here the story hardly goes into "One True Thing" territory.

The story is supposed to be based on the 1996 Miramax film "Beautiful Girls" directed by Ted Demme, but that film deals with a piano player. I put it in my Netflix queue, but it has a "very long wait" because of the publicity from this show.

On "One Tree Hill" (Cw) Lucas has also written a novel.
Posted by Bill Boushka at 7:53 PM