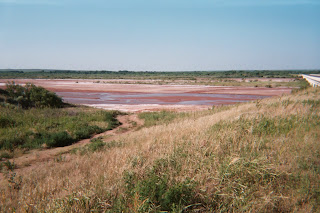 The History Channel offers an interesting "pre-Roswell" documentary -- UFO Files: Texas Roswell -- of an incident in April 1897 in Aurora, Texas, in southeastern Wise County, NW of Fort Worth. Some of the reconstructions for the film have more mountains than would be in the area, where the plains start to role, although some juniper-covered ridges called the Palo Pinto Mountains occur twenty miles to the West, and there is a big grade on I-20 near Ranger, TX.

In late 1896 and early 1897 there were numerous newspaper reports of flying objects all over the midwest, moving too quickly to be balloons -- Jules Verne aviation that was all that was available during that era. On April 19, 1897, a wooden tower in Aurora was destroyed when an object collided with it. Newspaper accounts report metallic debris and a humanoid body similar to the 1947 Roswell aliens. Objectively, it is difficult to discount this story. The property is fenced off today and not available to filmmakers, and some metallic evidence (an aluminum-iron alloy that curiously is non-metallic and that does not occur often) has been removed.

Will Oliver Stone some day make his own account of all of this? The History Channel link is here.

The same evening (March 19) the History Channel offered "Digging for the Truth: Lost Treasure of Petra" about a lost city in SW Jordan, hidden in cliffs in the mountains, that was a kind of Wall Street of its day, a couple of centuries before Christ. The City supposedly is related to the Indiana Jones movies. It was built by a tribe called the Naviteans. The desert city residents collected water through gutter channels carved in the canyon walls.
Posted by Bill Boushka at 7:04 PM

Hey - since you're into UFOs, have you seen this Roswell video?
www.flownetworkproductions.com/evidenceofaliens.htm I thought it was fake until I watched Part 2. What do you think?