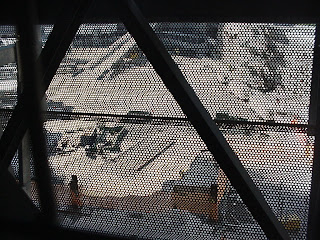 Damages, directed by Allen Coulter and written by Glenn Kessler and Todd A. Kessler, premiered today on the FX cablework, owned by FOX (but distinguished from the mainline FOX network in most cities). FX has a series called “Damages” in 2006 also, directed by Jonathan Lisco, but that did not get traction. The name of the series is transparent, as it refers to what people sue for in litigation.

The opening episode (55 min), sponsored by Cadillac, was presented without interruption and ran like a short movie. So many of the cable series are stronger than the big network series, and the movie had a sophisticated dramatic style and detailed plot that requires close attention. I wonder if this (lengthened to 90 min) would have been stronger as a feature film to start, maybe an independent style (Fox Searchlight) release for art chains like Landmark.

Glenn Close plays Patty Hewes, the aggressive female CEO of a law firm, who goes after an Enron-style executive Arthur Frobisher (an aging Ted Danson), for a “pump and dump” scheme to defraud his employees of their savings and pensions while he gets rich during the accounting scandal. Young law school grad Ellen Parsons (Rose Byrne) interviews Hewes and a competing film. She can’t make the Saturday interview because of her sister’s wedding, but Hewes shows up at the reception (in the ladies room) and hires her. The law firm life is 24x7, and in one humorous shot a make associate is seen in his office in his underpants while he awaits his suit to come back from the cleaners! Pretty soon the plaintiffs want to settle for what would be $20000 a person, but Hewes sidesteps it. In the ensuing complications Ellen wonders is she was hired for an accidental family connection, leading to a climax (actually told in flashback style) where her own fiancée is murdered and she winds up being picked up by the NYPD. Her last words in the episode, “I want a lawyer.”

There is plenty of nibbling at the social issues in the story. Hewes asks Ellen if she has husband prospects, but late in the episode she advises Ellen that ambitious people don’t have kids. You can leave wives but not your kids, she says. What about parents and filial responsibility laws?

I was lucky to see this. A dry thunderstorm knocked out cable service for an hour and a half tonight where I live. But that is nothing compared to the power failure in San Francisco today that shut down many major web sites.
Posted by Bill Boushka at 8:27 PM