CNN Presents: A Twister's Fury: In the Path of Destruction: A sobering meteorological report on why so many large tornadoes this season, and the danger is not over 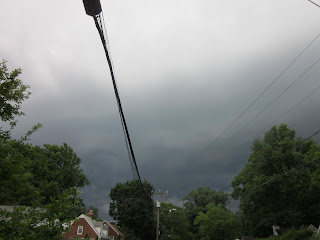 “CNN Presents: A Twister’s Fury: In the Path of Destruction” aired Saturday May 28 at 8 PM EDT.


Curiously, I could not find a definite CNN link for this show (about the Joplin MO. Tornado May 22) yet, but there is another blogger report  already (url) here.
The documentary opened with a pharmacist’s account of being caught in the eye of the twister. Later there was a walkthrough of the destruction of St. Johns Hospital. There was a comparison with Tuscaloosa, which had fewer deaths from a tornado that tracked longer.
Chad Myers explained the sudden deadliness of this tornado. It grew suddenly from F0 size just six miles outside of Joplin, into F5, giving little time for warning.
There have been four F5 tornadoes in the US this spring, an unprecedented concentration. Is this the result of global warming? Not necessarily.
The La Nina winter produced a huge snow pack in the Rockies, which caused the cold fronts coming down from the west to be even colder than normal. The drought in Texas prevented the thunderstorms from forming farther west, where tornadoes are frequent but usually smaller. The floods in the Mississippi River basin added to the humidity in the air, meaning that the cold air, when driven by upper level low pressure along the dip in the jet stream, would slam into very unstable air farther East than usual. The result is much larger than usual storms. The risk is still there now, along with the fact that the Gulf of Mexico is warmer than usual (which is probably the result of global warming), and which could add to the severity of the hurricane season, which starts June 1.
Could large tornadoes move still farther East this season? The North Carolina Piedmont, including the Raleigh area, had a long-tracking tornado in early April, and in 2002 southern Maryland had one. But it is true that on the East Coast, the most dangerous situations occur after long periods of warm moist southerly winds that didn't have to cross the mountains, which probably means more risk to Tidewater and Coastal Plain areas. I live close to Washington DC in the Virginia burbs.
Ashley Fantz of CNN provides this report:
Posted by Bill Boushka at 6:49 PM