"Revenge" is willing to exploit the "gay angle" 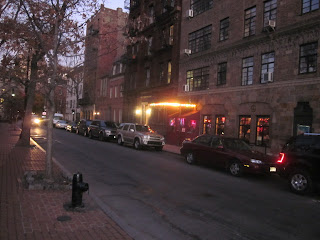 I poked for an hour at “Revenge” last night (titled "Loyalty"), and noted the secret self-taping of Tyler’s unveiling of Nolan in a hookup.  It seems that Amanda (Emily Van Camp) will use people anyway she can to reach her “goal”.  If exploiting a gay relationship in her environment suits her purposes, so be it.
Nolan (Gabriel Mann) seems quick enough as the geeky-looking and fast talking hacker (he should be working for Julian Assange  -- out of idealism, maybe, as he's supposed to be as rich as "Zuck" from his "inventions"), and Tyler (Ashton Holmes) is conniving enough to get what he wants, including blackmailing his boss not to fire him.
I found a posting about Tyler and Nolan on Yahoo!, here.
The character who is absolutely eyepopping is Declan (Connor Paolo), totally straight. A high school dropout, he says he really wants to go to college.
This is one of those shows (or movies) where all the characters are despicable, but their prettiness titillates the eye anyway.  No, it doesn’t make a good case for LGBT people along the way, but not for the world of heterosexual marriage either.
Here’s an interview with Garbriel Mann early in the season. Garbriel says his character has too much money.

An executive producer Mike Kelley, is not the same as Richard Kelly (Donnie Darko, etc), but I was fooled for a while. The show is certainly bizarre enough.
Posted by Bill Boushka at 10:35 AM